How do you recruit technology talent? What can be done at the company, regional and national level?

Irishman John Collison, the world’s youngest self-made billionaire and co-founder of Stripe, relocated to California to get closer to his clients, but in November, he claimed that it had become harder to attract top software talent to Silicon Valley due to the perceived political climate. He feared that the same may soon be true for the UK. Was he right?

Our last blog cited the skills gap in America where new computer science openings continue to outstrip the supply of relevant US graduates. Whereas unemployed Americans outnumber the roles available to fill, the UK’s unemployment runs at around double the number of open roles. So predictably, despite having some of the healthiest employment stats in Europe, concerns remain about filling technology roles, especially in computer science. This would worsen if overseas candidates become less available.

The state of affairs can be improved by investing to produce suitably qualified male and female technologists and to facilitate life-long learning and in role training. Responsibility lies at national, regional and company level. We’re going to look at national and city level initiatives before seeing what companies can do to find the best talent.

Governments need to invest in skills and infrastructure to make nations viable locations for companies. Freedom of movement between the UK and other EU states will be in place until the transition period finishes at the end of 2020. The government has expressed the need to attract the world’s “brightest and best.” It recently doubled the number of visas for talented individuals from outside the EU to 2,000. More significantly, it announced an industrial strategy in November 2017 to make the UK “the world’s most innovative nation by 2030”.

Part of this will involve further investment in Transport Networks, AI, Robotics, 5G Networks, Life Sciences and Smart Energy. There is continued support for initiatives like TechNation which is helping to develop “Tech Clusters” around the country through funding and promotion; despite a focus on London, 68% of technology investment is channelled to the regions.

There is encouraging foresight here. “Behind the curtain” technology roles are relatively well paid and way down the rankings of those replaceable by machines. It takes more than the jobs themselves though.

Since 2013, The Global Talent Attractiveness Index has monitored the ability of cities and nations to attract and retain talent. It doesn’t focus directly on technology roles but the correlation tends to increase as technical innovation becomes more central to business strategy. There are six main pillars to the analysis:

In this index UK is strongly placed for GK Skills, exchanging 2nd and 3rd rank with the USA for the last two years. It has improved its ranking for vocational and technical skills although these remain outside the Top 20. The UK’s drop down the list, despite several top 10 rankings, was due to a slump in its Retain score. Its rankings for Enable and Attract actually went up and one would hope that British pragmatism will find a way to protect these once freedom of movement between the UK and EU ceases. If it succeeds, we should see the retention ranking improve too.

The GTCI city rankings are volatile. London climbed from 16 to 14 in 2018, boasting an improved score despite the UK sliding; so a city can perform independently of its country to some extent. London remains a huge draw. It is top ranked for the number of countries it interacts with which gives rise to a diverse, two-way flow of talent and influence. The GTCI rankings aren’t technology specific but the government pitches London as the top tech centre in Europe and the top Fintech centre in the world.

Many newly successful cities have sought to make themselves attractive to businesses based on price and infrastructure subsidies. Those competitive advantages can work in the short term, but they tend to be transitory. For cities to have sustained success, they must compete for the grand prize: intellectual capital and talent.

Regional attractiveness for technology talent is often presented by comparing cities which can be variously referred to as Tech Hubs, Smart Cities, Technology Clusters or Technopoles. Parameters for Tech Hub rankings vary, with some dubious categories being included at times. For example, it’s great to have world ranked universities and business schools in the vicinity but the inability of these institutions to keep pace with real-world technology developments can actually be a weakness. It’s also great for a large proportion of the population to hold Bachelor’s degrees but that will tend to skew against large economically diverse cities like London or New York.

So what makes a genuine Tech Hub? Specialist cities like San José in Silicon Valley are Tech Hubs because the dominant industry is technology, generalists like New York and London have a huge presence of technology dependent sectors. The GTCI factors remain important but with more focus, so, for VT Skills read Digital Skills. Other parameters include the number of patents filed per capita, the number of start-ups and high growth firms, regional technology investment in skills and infrastructure, the number of technology venture capitalists and the level of investment in high tech start-ups.

Economist Richard Florida who specialises in the comparative analysis of cities thinks the key parameters are a digitally skilled workforce and venture capital investment into high tech start-ups. It has been suggested that talent tends to attract investment more than investment attracts talent, whatever the case, the two are related well enough to create a virtuous circle, especially when catalyzed by other factors. When the evaluation is weighted more heavily towards these parameters, the rankings tend to be topped by San Francisco and the wider Silicon Valley, New York and the North Eastern Seaboard, and London, but new locations are springing up globally to challenge them.

We started with a tech billionaire saying it’s hard to recruit in the region that 2ThinkNow ranked as the world’s top-ranked tech hub. So talent attraction challenges certainly exist at the company level. His concerns were focused on the attraction and retention of external talent; diversity certainly figures high in terms of what makes regions attractive and companies successful, we’ll come to that below.

If your organisation is serious about attracting software talent, HR and Technology specialists need to play a role in setting company strategy – if your company is still small, you may all be playing every role and the lack of silos is to your advantage. Your strategic roadmap can be designed to timetable development milestones and specify the dates by which well-defined roles need to be filled.

Training, reward, job rotation and progression should be built into your retention policies to avoid revolving door syndrome, maximize the team ethic and optimize your return on investment. Your Technology and HR specialists will work with Marketing in order to present the company as a center of excellence for technology, a champion of career pathways for technology professionals and a place where challenging, interesting work is done; then you need to walk the walk.

There needs to be demonstrable tech literacy on the recruiting side of the business, once again, small companies will do well here. You can’t afford to undermine your pro-technology profile when potential candidates start to show interest and move into application processes. You need to be consistent and authentic. Job ads should be concise, credible and suit the platforms they appear on, coders should be given the chance to demonstrate their skills and discuss their roles with people who understand them. Ideally, the recruiting panel will be multidisciplinary, demonstrating that software engineering and wider IT activity is central to company strategy and not a siloed function that sits off to one side. 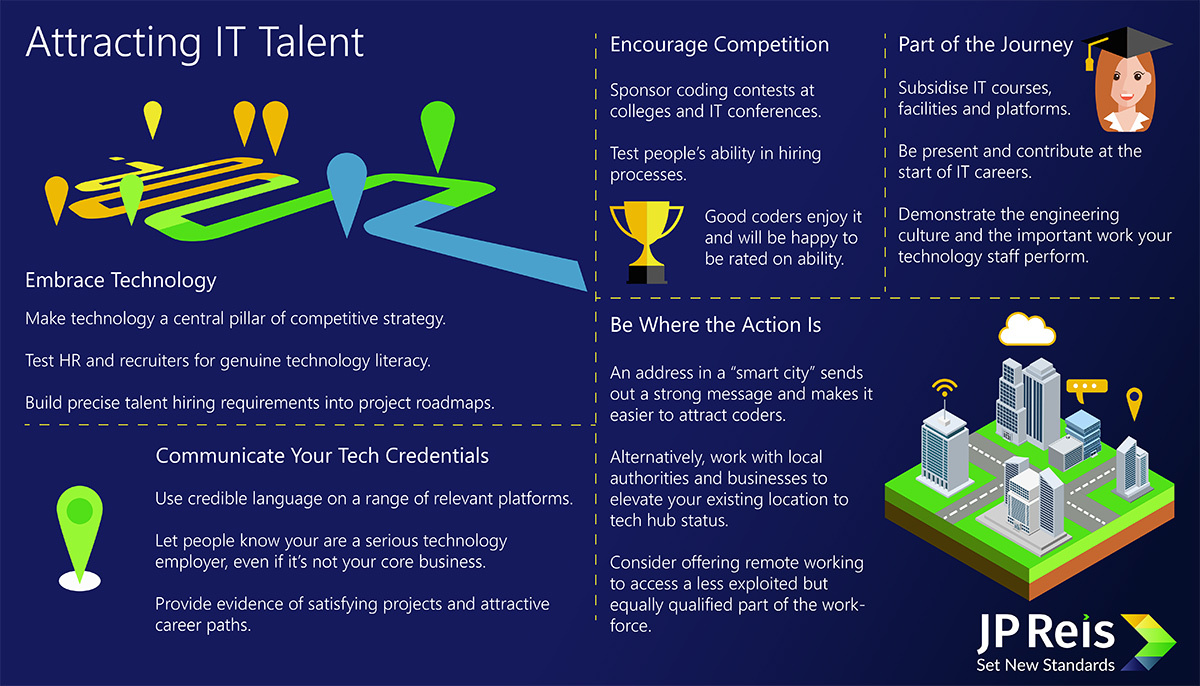 “Acquired diversity” which includes people’s different approaches to problem-solving, makes a company more successful. Proactively recruiting for diversity by race, nationality, gender etc. makes a company attractive and contributes to success by uncovering talent that may have been missed. It also drives up levels of acquired diversity. Value diversity, however, is shown to have a negative impact and should be avoided. This is why “cultural fit” remains a favorite phrase in the recruitment industry.

When recruiting IT talent it is sometimes wise to drop the corporate checklist and focus on a candidate’s ability and motivation. If the skills and passion are there, the rest can be worked on. Providing relocation assistance, training, remote working options, and even wardrobe guidance may prove far better value than taking someone who has every box ticked and is only chasing the biggest pay check.

When your recruitment and retention efforts start to pay off then the process of attracting talent should become easier. Your company will have more influence over what happens regionally and more protection, if required, against what happens nationally.

Martin works as our Chief Marketer and writer. He has also worked on numerous client engagements as a consultant and documentation specialist. He is a Fellow of the Chartered Institute of Marketing and holds the Henley MBA.