Will the Metaverse Affect Corporate Users?

Following announcements from Facebook and Microsoft, the Metaverse has captured the imagination of various industries, even if the consumer buzz about an “immersive internet” is more subdued. Virtual Reality isn’t core to JP Reis activity but some of the new developments will appear on systems that are very relevant to our clients so we’re taking a closer look.

The Metaverse was a hot topic at January’s CES Expo in Las Vegas. Among the obligatory robots and flying cars, companies old and new were keen to show how they would engage with the new environment and some, like Procter and Gamble, made presentations of well-known brands in a virtual space.

A Brief History of Virtual Reality

Virtual Reality [VR] has been the next big thing for over 30 years and the concept was proposed and developed decades before that. In the early 90s, glove and headset developments reached a point where the first commercial VR machines could be released. Anyone who tried the early Virtuality unit will recall an underwhelming experience. Meanwhile, Atari, Sega and Nintendo were all trying to monetize VR, The Lawnmower Man movie explored the concept in a slightly deranged way, and TV science shows were brimming with potential applications. The 1992 novel Snow Crash first introduced the term “metaverse” and just as the VR bubble was bursting in 1997, another book called Trading Reality applied VR to financial trading in a way that would terrify compliance, legal and business heads. Towards the turn of the millennium things went quiet until Augmented Reality, that has also been a concept for longer than one would expect, had its own period of false dawns in the noughties. In 2021 Microsoft and Facebook – now Meta – announced their ambitions for a new Metaverse. This won’t be a proprietary environment; in principle everyone will be present in what is described as an “immersive internet.” 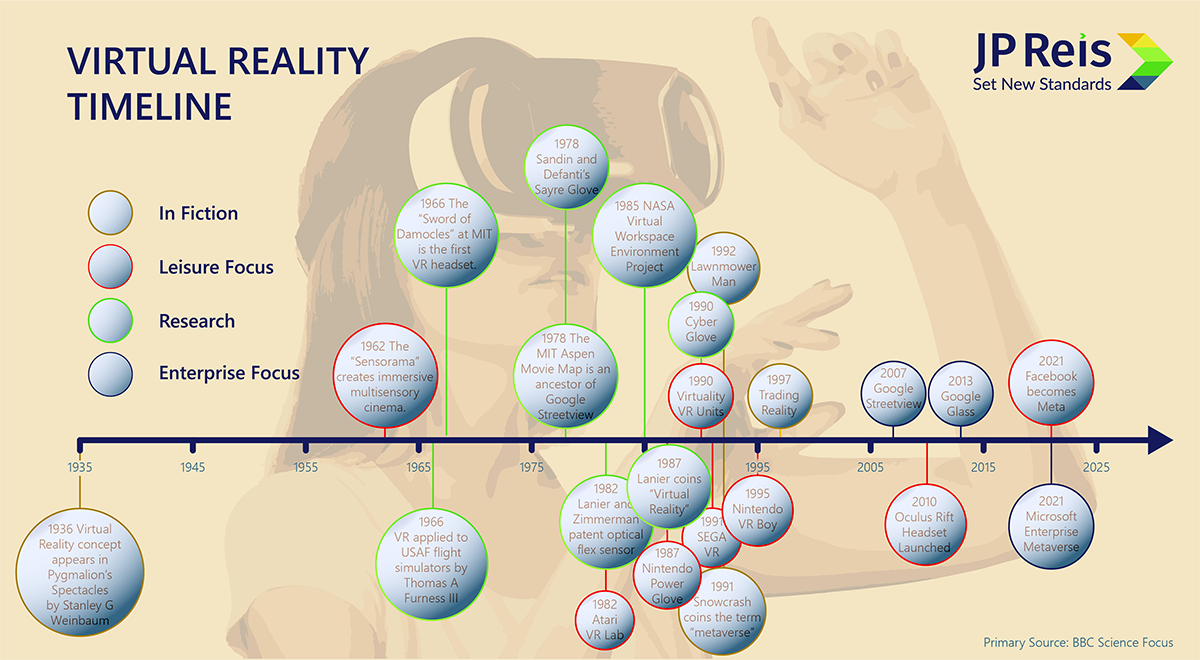 What’s New in the Virtual World?

The Metaverse will be persistent i.e. always be on, ready to access by using any of the Internet enabled devices you use now. Headsets will be a minimum requirement to enjoy the full, immersive, virtual reality experience. If the concept gains traction, a new generation of wearable technology is likely to emerge.

You will be able to own and change virtual property such as buildings, venues, businesses and objects which will stay as you left them for when you or others visit again. The success of the Metaverse will depend on user generated digital content and interactivity.

“A Metaverse is a digital space inhabited by digital representations of people, places and things.” Microsoft

People will have their own avatars in the virtual world. While this is nothing new for gamers, virtual concert goers and even some social media users, this is new in a commercial setting. Social areas of the Metaverse will be well-populated with avatars, many will be real people and some will be bots or agents but they will all be able to interact. In corporate Metaverse settings this will be about more than just hanging out. The likes of Microsoft hope that VR can help distributed teams to work more naturally together. The tracking of head movement and line of sight will allow the user to address a specific group member, potentially make virtual eye contact and certainly pull up a chair next to them to collaborate.

In some areas of the Metaverse, objects in the virtual world will represent real world objects. This may provide a way to control remote vehicles, maintenance robots or surgical equipment in routine or emergency scenarios. It could enhance people’s ability to work at macro or nano levels in environments that could be sterile, hostile, remote or in motion. It could even see physical manifestations of esports.

It is likely that VR will enter the business world as a driver of efficiency, cutting down on travel at the simple level but also allowing for the experiential, analytical testing of components and products, systems and services, and spaces and places before they become reality.

The Speed of Adoption

When somebody tells you a new technology will change your life, there’s no need to hold your breath, even if the statement eventually proves correct. The PC, Internet, social media and smartphones were radical innovations that changed how we lived; SaaS and Windows were disruptive technologies that changed how we use technology at work. In each case, the first viable offerings were brought to market and purchased by early adopters many years before one would expect. The true Internet Age didn’t arrive until well into Web 2.0 and the true era of Mobile Internet came way after the first iPhone release.

In theory, a radical innovation introduces one or more novel activities that become important in their own right, while a disruptive one changes the way we approach an established practice. In both cases, adoption starts slowly with very low return on investment enduring before, hopefully, an exponential curve sweeps them to ubiquity. The trigger for the upswing is often the type of incremental change that we’re more used to, such as increases to processing power, storage density, improved interfaces, weight, integration or connectivity.

With PCs we reached the stage where every company had a useful PC, and then every desk had a useful PC, at which point more homes started to have a PC until it became the norm. Once a bridgehead was established in residential settings, the focus on leisure applications grew. The increase of coding in schools was a significant secondary driver. For the Metaverse, it’s likely to hinge on an affordable headset. The market is growing by an impressive 60% per year from a low base that is almost totally focused on gaming. Corporate adoption for efficiency, productivity and safety purposes could theoretically see threshold take-up levels reached. In turn, that could transmit to domestic adoption once high-res headsets with a wide field of vision become cheap enough. Education may be a bigger driver this time, especially if more learning is delivered remotely. 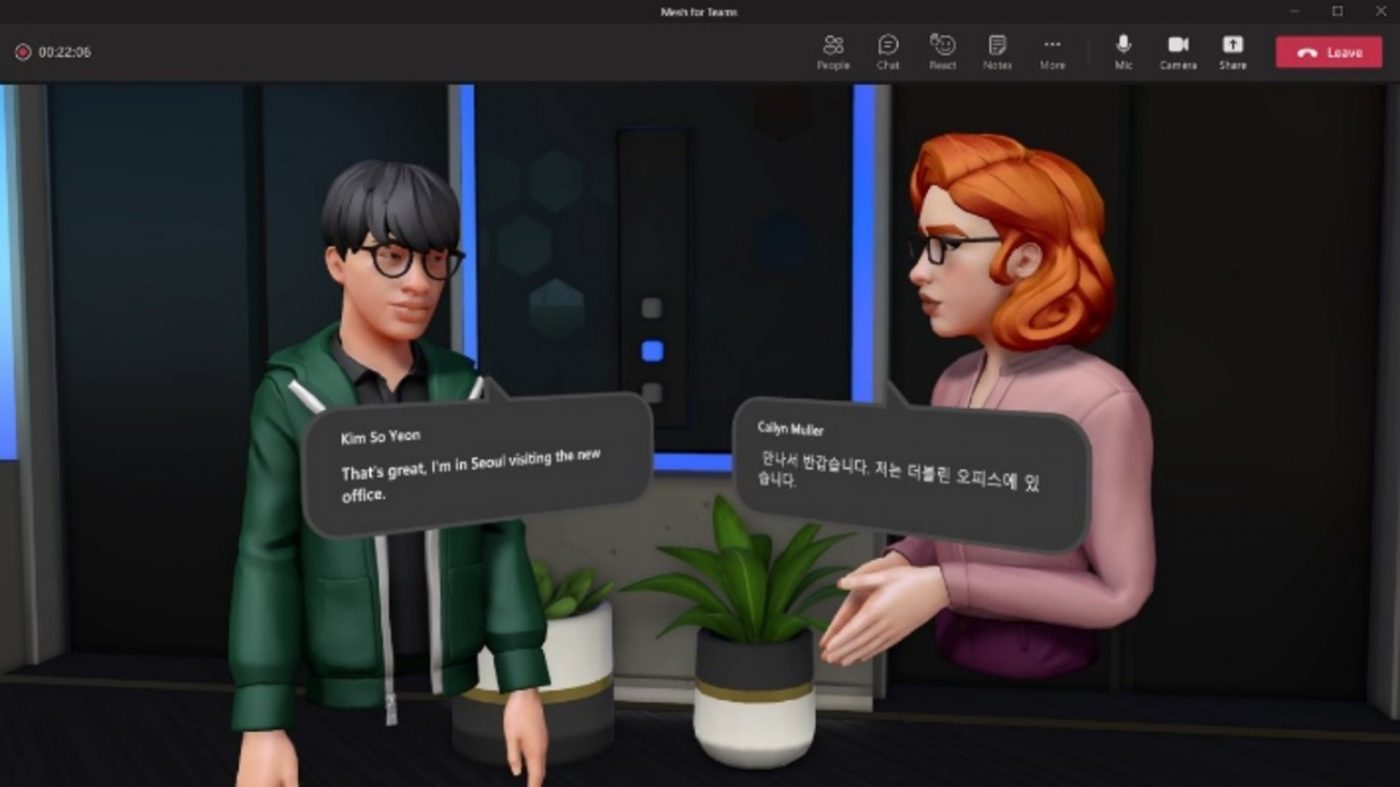 The transition to this new immersive experience has already started. Young adults today have had access to the limitless worlds of Minecraft and Roblox since they reached school age. For over a decade, characters in movies like the MCU series have use interactive visual technologies that appear to be impossible outside of virtual environments. There are countless immersive gaming spaces, to be accessed with or without specific hardware, and the profile of virtual concerts, many of which happen in gaming worlds, grew during lockdown. There will eventually be a multiverse of metaverses and anyone who sells anything will maintain all or part of one. No single company will take ownership of the whole thing although big players will emerge, mostly from companies we already know.

Our interest at JP Reis is in corporate communication applications. Despite Microsoft’s ambitious goals, they claim you can already benefit from their latest apps without headsets. So, although work paradigms have become more hybrid in the same way that our social lives had already done, it doesn’t seem like the quantum leap towards the Metaverse is happening yet.

On the trading floors that are our specialist area, it can take a long time for new communications technologies to be adopted. The risk of disruption is the main barrier, the wishes of traders and concerns of Compliance are others. SIP took forever to be an overnight success. Touchscreens took a long time too and video-conferencing, as for so many industries, only reached its adoption threshold during lockdown.

Mobile devices have helped to usher in new channels more quickly than before and IM is now an accepted part of trading communications that has changed the primary working style. We found that when traders had to work remotely, it wasn’t the lack of available channels that affected them the most but the lack of team engagement and feeling of presence. If hybrid working and the ESG drive persist, they will act as catalysts for the adoption of remote collaboration technology. So, while we won’t see traders cutting down the tallest crops to perform a stock transaction as imagined in Trading Reality, purchasing a batch of headsets would not break a bank. It would demonstrate that a company was taking its staff’s concerns seriously and goodness knows, traders do enjoy a piece of prestige hardware.